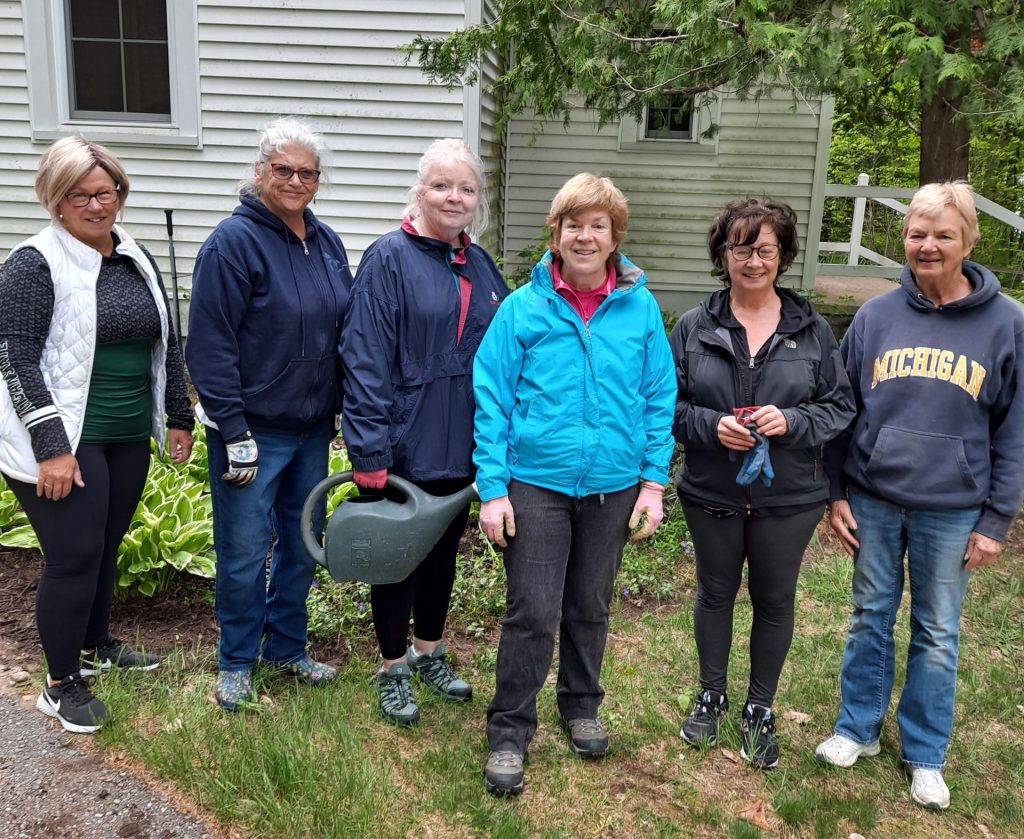 On May 25 th, 7 members of the Glen Lake Woman’s Club convened on the Chapel grounds at Old Settlers’ Park on Glen Lake. Each spring and fall they manage the grounds around the Chapel so it is picture-perfect for weddings and special occasions.

The Glen Lake Woman’s Club has been maintaining the chapel by funding improvements and beautifying
the area around the chapel ever since. Marcia Rose, a current Co-chair of the Chapel maintenance and
rentals, states that chairs and benches were added, and the ceiling and windows were painted in 1967.
In 1973, shutters were added to the windows; and, in 2019, the chairs were repainted. In 2021, the
pulpit was donated by a church in Bellaire. Current chair of the Chapel Garden committee, Carolyn
Wollenhaupt, has volunteered on the Garden Committee for over 15 years. This year she organized 6
other Woman’s Club members on May 25 th to prepare the Chapel for summer and fall events.
Old Settlers Park is located on the southeastern shore of Glen Lake, on South Dunns Farm Road (County
Road 675). Early settlers established it as a picnic ground in 1892.

The Chapel is available for use and is coordinated and maintained by the Glen Lake Woman’s Club on a first come, first served basis from May 15-October 31 st. It has a capacity of 50-70. To book an event, meeting, or wedding, contact Marcia Rose of the Glen Lake Women’s Club at (231) 334-4053.

Photo Caption: Carolyn Wollenhaupt’s Chapel Garden crew poses for a photo while beautifying the
grounds of the Chapel in preparation for summer and fall events at Old Settlers’ Park on beautiful Glen
Lake on May 25th.