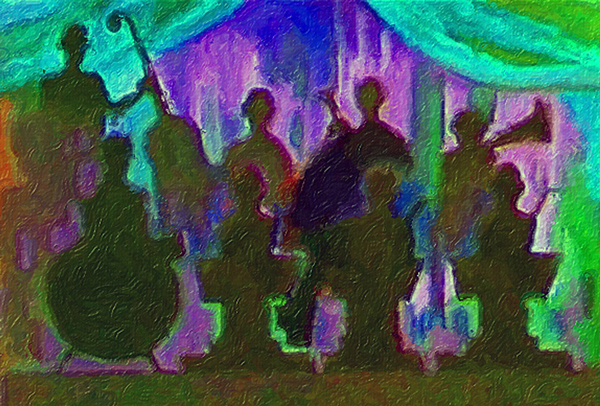 Get behind the scenes with the “Mostly Music” series continuing in January 2017. The “Mostly Music” series is a winter extension of the Manitou Music Festival. “Mostly Music” is hosted by Bob Foskett, who programmed jazz radio in Chicago for 30 years and is now a DJ for Friday Morning Jazz at WNMC in Traverse City. Programs will be roughly 60% music, 40% discussion. There are programs in January, February, and March and if you enjoy watching and listening to live music, “Mostly Music” provides an opportunity to get some “behind-the-scenes” information too. Plus it’s another way to escape cabin fever in the throes of winter.

The first session of Mostly Music’s winter series is a lecture with recorded examples of the continuing metamorphosis of the jazz big band in American music.  As American tastes in popular music changed in the 1950’s, the big bands, which were considered the core of American popular and dance music until then, seemed to be on their way to extinction.

However, creative musicians and changes in music education not only revived the big band concept, but nurtured it to the point that today there are more big bands playing jazz than during the heydays of the 30’s and 40’s….by at least a thousand fold!  GAAA’s resident jazz nut Bob Foskett will trace and explain that development.