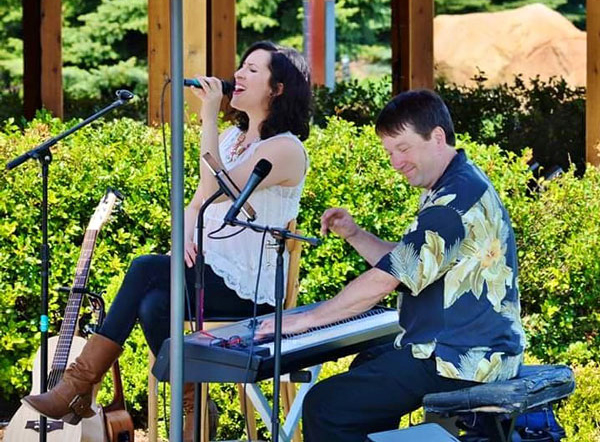 Miriam Pico has been writing songs and performing since she was barely able to walk. She sings, plays guitar, ukulele and even whistles! She recently starred in Traverse City Old Town Playhouse’s sold out production of “Evita.” She has released three CDs. David Chown has been playing piano professionally for over 25 years. He’s equally adept at playing jazz and popular music. David has released seven CDs on his own label and teaches over 40 piano students in addition to teaching Audio Technology at Northwestern Michigan College. Miriam and David have been part of the Traverse City music scene since 2007. At the GAAA, you’ll be able to witness them having a lot of fun with popular standards, jazz, and original compositions.

The “Mostly Music” series brought to you by the Glen Arbor Art Association (GAAA), is a winter extension of the Manitou Music Festival. Smaller groups (1 or 2 artists) perform in the GAAA gallery, but also spend some time talking about their music. The GAAA, 6031 S. Lake Street in Glen Arbor, provides a more intimate setting than our larger outdoor concerts that allows the audience much closer contact with the musicians. “Mostly Music” will be hosted by Bob Foskett, who programmed jazz radio in Chicago for 30 years and is now a DJ for Friday Morning Jazz at WNMC in Traverse City.

Admission is $10 and prepaid reservations are recommended due to limited seating capacity. Please note that actual tickets will not be issued. Your name will be added to a list at the door when prepaying. Based on availability, you can also pay at the door.